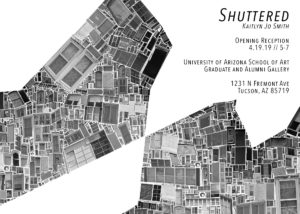 Shuttered tells an industrial narrative through incessant audio and visual repetition that mirrors the monotonous labor of the factory floor. A shape reminiscent of shattered glass is systematically filled with over two thousand windows that have been sourced from the homes and businesses surrounding abandoned factories in the Rust Belt. Audio from an automotive factory’s floor accompanies the gathering of windows, while sounds of broken glass and demolition signal their retreat.

Serving as a topographical map of a transitory place, each point denotes one of twenty-seven cities (Detroit, Cleveland, Buffalo, etc.) that have suffered traumatic loss of industry (and consequently population) since 2000. Spaces that once bustled with life and the promise of the American Dream now stand vacant and vandalized, a reminder of the moment before global capitalism took hold. The windows promise a glimpse into the domestic lives of former employees that they cannot deliver. Instead, they build upon one another to tell the story of American deindustrialization through accumulation and abstraction.