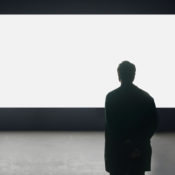 Alfredo Jaar is an artist, architect, and filmmaker who lives and works in New York. Considered one of the most uncompromising, compelling, and innovative artists working today, his work looks deeply, in a sustained and critical way, into how knowledge is constructed. Fusing the aesthetic and the ethical to focus on injustices around the world, Alfredo Jaar has successfully pushed the boundaries of what art is while simultaneously asserting and questioning art’s ability to raise awareness, solicit empathetic response, and effectively advance social justice. “Artists create models of thinking about the world, that is how we affect change,” he has said. Jaar was born in Santiago de Chile, where he studied architecture and film direction.

Jaar has realized more than sixty public interventions around the world. Over fifty monographic publications have been produced about his work.  He became a Guggenheim Fellow in 1985 and a MacArthur Fellow in 2000.

His work can be found in the collections of The Museum of Modern Art and Guggenheim Museum in New York, the MCA in Chicago, MOCA and LACMA in Los Angeles, the Tate in London, the Centre Georges Pompidou in Paris, the Centro Reina Sofia in Madrid, the Moderna Museet in Stockholm, the Louisiana Museum of Modern Art in Humlaebeck and dozens of other institutions and private collections worldwide. 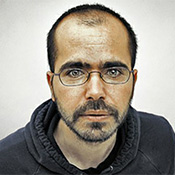 Iraqi-born artist Wafaa Bilal, an Associate Arts Professor at New York University’s Tisch School of the Arts, is known internationally for his on-line performative and interactive works provoking dialogue about international politics and internal dynamics. For his 2007 installation, Domestic Tension, Bilal spent a month in a Chicago gallery with a paintball gun that people could shoot at him over the Internet. The Chicago Tribune called it “one of the sharpest works of political art to be seen in a long time” and named him 2008 Artist of the Year. Bilal’s work is constantly informed by the experience of fleeing his homeland and existing simultaneously in two worlds – his home in the “comfort zone” of the U.S. and his consciousness of the “conflict zone” in Iraq. Using his own body as a medium, Bilal continued to challenge our comfort zone with projects like 3rdi and …and Counting. Bilal’s most recent body of work, Canto III, premiered in a solo booth at the New York Armory Show in 2015 and went on to be shown in the 2015 Venice Biennale.

In 2008 City Lights published “Shoot an Iraqi: Art, Life and Resistance Under the Gun,” about Bilal’s life and the Domestic Tension project. He holds a BFA from the University of New Mexico and an MFA from the School of the Art Institute of Chicago. His work can be found in the permanent collections of the Los Angeles County Museum of Art, Los Angeles, CA; Museum of Contemporary Photography, Chicago, IL; MATHAF: Arab Museum of Modern Art, Doha, Qatar; amongst others.

Wafaa’s talk is co-sponsored by the Center for Middle Eastern Studies.

Timothy K. Eatman, Ph.D. is the inaugural dean of the Honors Living Learning Community (HLLC) and Associate Professor in the department of Urban Education at Rutgers University- Newark. Prior to this engagement, Tim’s primary network of operation and leadership for over a decade was with Imagining America: Artists and Scholars in Public Life (IA). Serving as Director of Research (2004 – 2012) and as Faculty Co-Director (2012 to 2017).

An educational sociologist who earned the 2010 Early Career Research Award from the International Association for Research on Service Learning and Community Engagement (IARSLCE), Tim was elected to the IARSLCE board of directors in 2016. He is a widely sought-after speaker, workshop facilitator, and collaborator who has earned local, national and international recognition for his leadership in advancing understandings about the multi-faceted impact of publicly engaged scholarship in the university of the 21st century.

Tim has published in such venues as the Journal of Educational Finance and Readings on Equal Education, Diversity and Democracy (AAC&U), and The Huffington Post. He has also written several book chapters and reports including the widely cited Scholarship in Public: Knowledge Creation and Tenure Policy in the Engaged University, a seminal IA research report on faculty rewards and publicly engaged scholarship. This work extends to a study of the aspirations and decisions of graduate students and early career scholars. Some of his most recent scholarship includes a major project as co-editor of The Cambridge Handbook of Service Learning and Community Engagement (2017). The core of Tim’s research takes up questions of equity in higher education and the larger society.