By Mike Chesnick
School of Art

Not only did Margaret Bailey Doogan inspire students in the classroom, she also was an outspoken advocate for women artists and designers across the nation.

Doogan, a School of Art professor emerita whose acclaimed paintings and drawings addressed issues of women and aging in society, died July 4 in Tucson. She was 80.

“With powerful imagery, combining bite and humor, she called out sexism and misogyny in academia as well as in the Tucson art community and the art world,” said Ellen McMahon, a School of Art professor and associate dean for research in the College of Fine Arts.

Doogan, taught for 30 years at the University of Arizona, retiring in 1999. She mentored McMahon, a graduate student who took all three design courses that Doogan taught.

“Studying graphic design with Peggy inspired me to see everything with fresh eyes and to fall in love with subtle details of typographic design,” said McMahon, who earned her M.S. in Scientific Illustration. “Several years later, when Peggy’s focus changed from design to painting, I was hired into her line in the School of Art — a position I still occupy.”

Barbara Penn, a School of Art professor emerita, said Doogan “felt a genuine love for her students — articulate and encouraging when giving feedback on their work, while she also worked hard in her studio. She was one of the very favorite professors to her students … and they have not forgotten her.”

After Doogan retired from academia, she continued to display her work at exhibitions locally and nationally, including an important piece in the permanent collection at the Brooklyn Museum, a large charcoal, pastel canvas commemorating Mairead Farrell, an Irish rebel shot to death.

Doogan, who earned her BFA in Illustration from Moore College of Art and Design in Philadephia, came to Tucson in 1969 after working for an advertising firm in New York, where she designed iconic logos such as the Morton Salt girl, “Mortie.”

She earned a master’s degree in animated film from UCLA in 1977. Doogan’s thesis film, “Screw: A Technical Love Poem,” compared the language of love to pieces of hardware and was shown worldwide in film festivals.

The University of Arizona Museum of Art held multiple shows featuring her work, including “Articulate,” in which she traveled across the U.S. interviewing prominent women in the art world. The show featured larger-than-life, mixed-media portraits of the women, with stereo speakers beside each playing edited recordings of Doogan’s interviews.

In a 2005 interview with the Tucson Weekly, Doogan talked about why she portrayed the bodies of older women in her art.

“There are very few artists who have not portrayed the body as ideal,” Doogan told Weekly reporter Margaret Reagan, listing Rembrandt, Thomas Eakins, Lucian Freud and Alice Neel among the “rebels.”

“I deal with the real body,” Doogan said. “Our bodies are diaries of our experience. Whatever happens to us is recorded there: wrinkles, scars, the way we stand. That specificity fascinates me. I think it’s beautiful.”

McMahon and Penn elaborated on Doogan’s life in a Q&A with the School of Art.

Q. Could you talk more about Peggy’s contributions to the university and art community?

McMahon: When she joined the art department, there was only one other women in the studio area. She fought tirelessly to usher in women throughout the 1980s until the ratio of male to female was equal. I was one of the fortunate women she supported.

A story about her: As she was building her national career as an artist, to get around the gender bias in the art world, she began using the name “Bailey Doogan,” so her gender wasn’t identifiable by potentially biased jurors and curators.

Penn: Professor Doogan was a great mentor to me as well, in my teaching. The job was constant for all of us, and yet she found time to share ideas. Bailey offered stories of how inequality eventually changed to equality, when the numbers of women professors became equal to the numbers of male professors. This included the School of Art’s professors in Art Education, Art History, Studio Art and Graphic Design.

Bailey was lauded in Tucson by her community and her colleagues. She exhibited her work in Tucson often, and she had many local fans — all while she was becoming known for her art, nationally and internationally. She also was very active in the College Art Association; the largest convening of art historians, artists, and visual arts professionals that annually awards a Distinguished Artist Award for Lifetime Achievement. She worked many years as a CAA Committee Leader, and as such, her reach extended to artists and professors across the United States. Hers was a decisive voice for those whose accomplishments transcend their individual disciplines and contribute to the profession as a whole.

Q. What are some of your favorite memories about Prof. Doogan?

McMahon: I’ll share two of her stories that made a big impression on me when I was her student. After graduating with a BFA in Illustration Peggy went to work for a New York advertising firm, very much like the one dramatized in the TV show “Mad Men.” She was very young and the only female creative. She got the assignment to redraw the little girl holding the umbrella who was the mascot for Morton Salt (I just checked my cupboard and she is still on the package.) She told about endlessly uncomfortable meetings with powerful middle-aged ad men who kept wanting her to make the little girl’s skirt shorter and shorter.

The other story is more upbeat. The firm got the job to design the Yuban coffee can in the 1960s. At the time, all the major brands were using bright colors like red, blue and yellow. She proposed a brown can. Her co-workers and the client had their doubts, but she pushed for it. She used to say proudly, “Go look at the coffee aisle in the supermarket and now more than half of the packaging is brown.” Her design was also ahead of its time, featuring a photograph of a woman with a Jackie Kennedy haircut sipping from a streamlined, distinctly modern coffee cup.

Penn: Professor Jackson Boelts had a connection to artists and designers in Poland, and had traveled there on a design project. Jackson, who knew Professor Doogan well, had made arrangements for her to attend Organizatorzy Pleneru — an artist retreat in Julin, Poland. That week, the plumbing in Doogan’s house  failed and broke all the pipes in her front yard. Both Bailey and Jackson very kindly asked me to take Bailey’s place at the artist residency. … This was such an opportunity — a real gift to visit Poland. My work was included in the exhibition at the residency and at another gallery location in Julin, Poland. Two years later, I was invited to return to Poland once again, and … my work was exhibited at the magnificent Wanda Siemaszkowa Theatre, in Rzeszow. …

Three years (after I was hired in 1991), there was a need for a painter and another faculty member was willing to take on my Foundations position. Professor Doogan, known for being forthright in the School of Art, stood high on behalf of me; then the group of painters voted to bring me into the Painting Area. Ten years younger than Doogan, I always looked up to her. She supported her female colleagues, and she always supported me and my work. It meant so much.

In a 1985 Women’s Art Journal issue, University of Arizona Professor of Art History Sheldon Reich wrote an essay on Doogan and her artwork, saying she “has the right to dare anything.”

“Through her painting, she is reaching out to the rest of us,” Reich wrote, “reaching out to share her responses to life-loneliness, disappointment, love, and, above all, what it means to be a woman in America.”

Mike Chesnick is the School of Art’s marketing, outreach and communications specialist. Contact him at mchesnick1@arizona.edu. 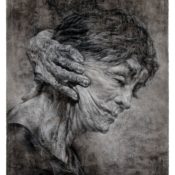 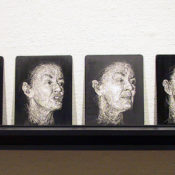 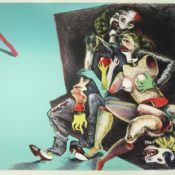 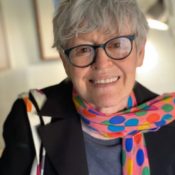