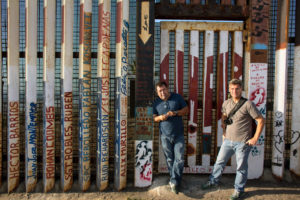 School of Art Photography Professor David Taylor was recently featured in a New York Times article about his work at the U.S.-Mexico border and the resulting exhibit DeLIMITations, on display at MCASD (Museum of Contemporary Art San Diego) until November 27. The following is an excerpt from the article:

Marcos Ramírez, the ebullient artist known as ERRE, recently drove from San Diego to his workshop studio in Tijuana in a black Chevy Suburban riddled with bullet holes. The vehicle had a starring role in “La Suburban Negra,” or “The Black Suburban,” his 2012 installation and video about the drug trade, in which he plays a drug lord, a hit man and a cop.

“The police, the bad guys, the C.I.A., the soccer moms — everybody with authority has a black Suburban,” he explained as he barreled down Interstate 5 toward the border, making a slight detour for a strawberry ice cream cone.