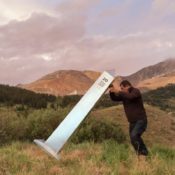 DeLIMITations: Survey of the 1821 Border Between Mexico and the United States, a collaboration between School of Art Professor David Taylor and Mexican artist Marcos Ramírez ERRE is involved in several events this spring. The schedule of events is listed below.

The two artists conceived of DeLIMITations as a survey of the border between their respective countries as it existed in 1821. Setting out to mark a boundary that was never physically defined in its entirety, that original demarcation was eliminated following the Mexican-American War in 1848, costing Mexico more than half its land – 500,000 square miles worth.