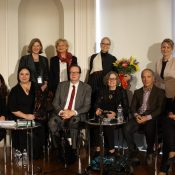 Professor of Art History and Professor of Anthropology, Dr. Irene Bald Romano recently participated in meetings of the German-American Provenance Research Exchange Program in Washington D.C. and was the moderator of a public panel discussion on October 26, 2019 at the German Historical Institute, entitled “Object Lessons: German and American Perspectives on Provenance Research of the Colonial and Nazi Eras,” organized by the Smithsonian Institution, the German Historical Institute, and the Goethe Institut.

The discussion focused on the challenges facing provenance researchers and museums in tracing the histories of art works and cultural objects, especially those acquired centuries ago, what provenance researchers of Nazi-era looted objects can learn from those who study collections acquired under colonial rule, and vice-versa, and how the methodologies overlap. The panelists also discussed issues of historical justice, museum exhibition practice for cultural objects with questionable provenances, and viable pathways to just and fair solutions for collections acquired under colonial rule or during the Nazi period.

Dr. Romano’s current research involves an examination of the fate of antiquities in the Nazi era — the collectors, dealers, and methods of confiscations and transfers of ancient Egyptian, Near Eastern, Greek, Etruscan, and Roman objects.