Kareem-Anthony Ferreira, a first-generation Canadian, completed his BFA at McMaster University in Hamilton, Ontario in 2012 and his MFA at the University of Arizona in 2020. Using a combination of painting and collage, Ferreira builds richly textured surfaces upon large-scale unstretched canvases, depicting intimate scenes that negotiate his Canadian and Trinidadian heritages.

After meeting with Nino Mier Gallery staff in January, Ferreira discussed doing a show at the gallery in 2021. As with many exhibition, a different show scheduled in London was canceled this summer so Ferreira was able to send work to Nino Mier much earlier than expected.

“It is unbelievable opportunity you have a show in LA at such an established gallery. I am honoured to have been asked to do the show and thankful. The response has been great. I have been able to connect with a large group of artist curators and other creative people and was lucky enough to receive representation through Nino Mier gallery,” said Ferreira.

“In my work I am tracing patterns of personal, familial and social identity within the genre of black portraiture. In an effort to shift the overly simplified perceptions that my two disparate familial communities hold toward the other, I offer visual re-creations of both identities, personal family traits, and events. The experiences and narratives that manifest in each work are the result of combining several vernacular photographs into a compositional arrangement. The paintings display an accumulation and assemblage of disassociated objects motivated by my family’s compulsive repurposing of ordinary materials. I similarly repurpose these materials by incorporating them onto the surface of my paintings. Patterns are taken from commercial representations of the Caribbean and are meant to be easily identifiable, cliché, and at times, sarcastic.

“The social imaginaries placed on these non-indigenous patterns and textiles satisfy North American desires for a mental state of ‘island life’ characterized by ‘island dress.’ The commercialized and mass-produced patterns serve as a mechanism for psychological transport to the Caribbean, an unspecified fictional location whose primary purpose is to serve its visitors as a space of escape and entertainment. Caribbean, and specifically Trinidadian identities are flattened and stripped of their historically transcultural and transnational complexities. In my paintings, I explore the island imaginaries through a personification of repetitive flora and fauna patterning, which sits in contrast to the emotional sincerity I convey through the human figures and expressions. My reverence for my hybridized community is conveyed through my portraits of the black body as individuals or groupings, the family unit or community gathering to participate in the everyday lived experiences.” 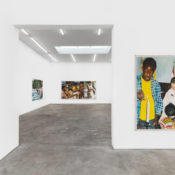 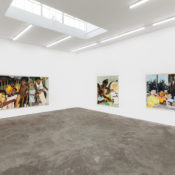 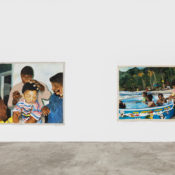 This message is only visible to site admins
Problem displaying Facebook posts. Backup cache in use.

Error: Error validating access token: The session has been invalidated because the user changed their password or Facebook has changed the session for security reasons.
Type: OAuthException

Projects featured this week were selected from our most recent call-for-submissions. I was able to interview each of these individuals to gain further insight into the bodies of work they shared. Toda...
View on Facebook
·Share

What are you doing this summer? Medici recipient Trent Pechon shares plans for his creative practice:
.
"My projects involve transforming objects and moments of everyday life into something new and strange. I do this through slow and careful craftsmanship and meticulous presentation. I’m interested in how objects can communicate in ways that words cannot. Ultimately, I’m interested in the way humor can help people feel and see the bittersweetness of life.
.
"I am raising questions about the processes of making art by granting the raw material agency over the finished frame. I am creating a humorous tension between the juxtaposition of the raw branch and the finished frame, questioning when the art ends and begins. I am using the frame as a portal from the outside world into the world of art." ... See MoreSee Less

The University of Arizona Historian Tyina Steptoe gives the history of Juneteenth and predictions about recognizing and celebrating the holiday in the future.
bddy.me/3hGnAyS ... See MoreSee Less

Summer usually means a break for academics but opportunities made possible by the Medici Awards allow our artists to continue creating after classes end.
•
This summer @perlasegovia will be creating embroidered shoes out of natural canvas to delve deeper into her focus on the plight of immigrants, their hope, strength, and perseverance.
•
In her own words, "Human beings have migrated since time immemorial, during times of borderless and fenceless territories. Some would say that migration is one of the most fundamental of human rights. However, we currently live during times where there is political divisiveness and sentiments of anti-immigrant nationalism are high.
•
"I find that when we put ourselves in other people's shoes we become more empathetic of others' plights . . . I chose to replicate people's memories of their homeland using freehand machine embroidery onto canvas to reflect the abrupt and quick decisions that have to be made by many immigrants.
•
"I believe textiles transcend culture, geography, and time and are capable of serving as a unifying impetus in our tumultuous society." ... See MoreSee Less

We're proud to announce that Paul Ivey has received the Superior Teaching Award from the The University of Arizona Humanities Seminars Program for the third time! All Humanities Seminars Program courses are taught by present and former University of Arizona professors selected for their scholarly accomplishments and exceptional teaching abilities. ... See MoreSee Less

We are not surprised!!! A wonderful detail guy and great teacher!!

I'm so proud of my childhood friend!