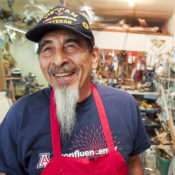 The UA School of Art professor has gained national and international attention for his satirical artwork.

At the end of his military service with the U.S. Navy, Alfred Quiroz committed himself to formal art studies, which would launch a lifetime of artistic work and teaching.

In his South Tucson studio — a space originally provided decades ago by his mother’s husband, so long as Quiroz took care of the building’s security and maintenance — Quiroz produces narrative paintings that sharply explore the realities of people, whether they are in formal positions of power or are those whose voices are actively silenced.

In his work, whether on canvas or large-scale mural paintings, Quiroz, a University of Arizona School of Art professor, documents cultural symbolism, most often through an exploration of historic events and figures. He engages in a sort of allegorical play as he shapes satirical stories around iconic and popular figures such as Our Lady of Guadalupe, George Washington and even Donald Duck in his artwork.

Quiroz, a Vietnam War veteran who joined the UA faculty in 1989, has gained national and international fame for works exploring issues connected with his own Latin American heritage, and also for his visual explorations of issues related to border tensions, racial tensions and violence, warfare, corporate fraud, and global capitalism.

Also, having been hugely involved in southern Arizona’s mural scene, Quiroz has either designed to co-produced extensive murals, including a piece dedicated to the UA-led OSIRIS-REx mission in 2014 on the Michael J. Drake Building; one produced for the Phoenix Mars Lander Science Operations Center in 2006; and a U.S.-Mexico border project from 2004 to 2010, during which he was a Fulbright-García Robles Scholar. At the UA, he introduced in 1995 the first mural class in the School of Art, resulting in the mural frieze around the Joseph Gross Gallery building on campus.

In working with students, as he has for decades, Quiroz’s direction is offered in no ordinary way. He seems to be much more of a coach, encouraging his students to explore their own narratives and concepts, hoping that he can encourage them to find their own ways of communicating, just as he has.

For his work, Quiroz has received numerous awards and other recognition, including the College of Fine Arts 2015 James R. Anthony Award for Sustained Excellence in Teaching and the Dean’s Teaching Award for the 2003-2004 academic year. He also received the LULAC Lifetime Achievement Award in 2007.

Quiroz, who is also a UA Faculty Fellow, isn’t merely trying to train students to work in the profession as artists, he says. Rather, he wants to cultivate the creative, deep-thinking capacity in students — something he sees as important regardless of profession or place.