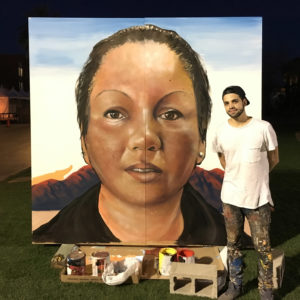 MFA student Karlito Miller stands beside his portrait of Guadalupe Garcia de Rayos, mother of two U.S.-born children who was deported to Mexico this month. Guadalupe was arrested and detained February 8th 2017 during a routine check-in with immigration officials. She came as a child and had been living in the United States for the past 21 years, but was arrested in 2008 during a raid in Maricopa County and convicted of a felony for using forged documents in order to get a job and provide for her family. It wasn’t until the new regime took power that she became considered a “threat” to national security.

Temporarily installed at The University of Arizona. 8ft x 8ft. Latex and spray paint on mdf board.

Speaking about their work, she says it’s “mostly figurative, and I enjoy the process of putting what I see onto a canvas. To me, art helps me understand the world. Whether it’s how someone else sees it or expresses themselves, I think it’s a way of communicating with each other. What I can’t express with words, I can express with art.”

More art from Iliana can be found on their Instagram @ilipad.art !

Juntos Art Association has organized a series of events, including a short film by my University of Arizona School of Art colleague Nicole Antebi. Happening Friday at the Rio Grande Theatre in Las Cruces, NM between 6:00 - 9:00 PM. Please share with others.
Film, Literature, and Performance
- "The Way of the Drum" with Arnold Herrera
- Author of "Code Talker", Judith Avila
- Three Short Films:
· "La Catrina" by Ilana Lapid
· "Seven String Barbed Wire Fence" by David DeWitt and Diana Molina
· "100 Partially Obscured Views" by Nicole Antebi
- Performance by The Roadtrip 28 Ensemble
FREE TO THE PUBLIC ... See MoreSee Less

Congrats to Becky Senf, who's an affiliated faculty member of the School of Art!Center for Creative Photography was at the center of the fashion world as Chief Curator Becky Senf led fashion designer and icon Donatella Versace (center) and Vogue editor-in-chief Anna Wintour through the exhibition “Richard Avedon Relationships” during Fashion Week in Milan, Italy. The exhibition, which Senf curated with works from the CCP archives, opens today in the Palazzo Reale. ... See MoreSee Less

Get ready for a free screening of “The Thief Collector" at Centennial Hall on Thursday, Oct. 6 at 7 p.m. The film, which coincides with the return of the painting "Woman-Ochre" to the University of Arizona Museum of Art, is a fascinating look at a mild-mannered couple at the center of one of the greatest art heists of a generation. Register for free at artmuseum.arizona.edu/events/event/thief-collector-film-screening . The painting's return is part of the Arizona Arts Signature Series (azart.fyi/ArizonaArtsSeries22). ... See MoreSee Less

Read about the School of Art's renovations — and all the cool things our students, faculty and alums are doing! conta.cc/3DRe21k ... See MoreSee Less

One of our faculty members Sama Alshaibi had an exhibition opening this weekend at the Phoenix Art Museum, titled “Generation after Generation”, and also received the 2021 Scult Artist Award!

Her exhibition explores themes such as cultural empowerment, multinational identity, and deep introspection.

Sama will also be giving an artist lecture on Wednesday September 28th at the Phoenix Art Museum from 6:30-7:30 pm. More info on the @phxart page.