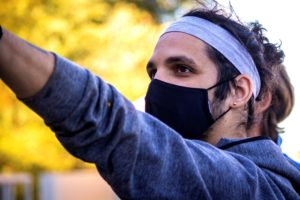 The School of Art is getting a new mural. Recent alumnus and internationally renowned muralist Karlito Miller Espinosa, aka Mata Ruda, is creating a mural on the School of Art’s Joseph Gross Gallery during the month of November 2020.

The mural is part of the arts renaissance at the University of Arizona. The Arizona Arts master plan envisions a revitalization of the Art District as a unique gateway to the Arizona campus. This mural is one of the first steps to realize the vision. Karlito (MFA, studio art, ‘19) was scheduled to begin the project in April 2020, but the coronavirus pandemic caused a delay.

“I’m excited about painting a large mural on the campus of a public institution of higher learning such as the University of Arizona, because it falls in line with the tradition of my favorite artists such as Diego Rivera, David Alfaro Siqueiros, and Juan O’Gorman whose work decorate the campus of the National Autonomous University of Mexico,” said Karlito.

“Their murals and mosaics not only beautified the campus, but also played a historically important role in the development of the student body’s progressive ideology, particularly in the ’60s and again more recently today. This is a great moment to take on a project that reflects the changing tides.”

For the University of Arizona, the mural is an important step in realizing the vision of an outward-facing and publicly engaged Arts District on the northwest corner of campus.

“The mural serves as a literal point of connection between campus and the broader community,” said School of Art Director Colin Blakely. “This connection is reinforced by Karlito’s thoughtful content celebrating the art’s connection to the culture and people of Southern Arizona. That the mural is designed and painted by one of our own former students who is also internationally renowned for his mural work makes the project all the more meaningful for us.”

The mural, which will primarily face Speedway, will include various images that represent the University of Arizona, the Sonoran desert, local Indigenous culture, and fine art.

“Karlito’s mural is an important component of our ongoing efforts to elevate the arts on campus,” said Arizona’s Vice President for the Arts, Andrew Schulz. “This visually compelling work announces in a very public and visible way that ‘creativity happens here.’”

This is not the first Tucson mural from Karlito. Just completed this summer on the John B. Wright Elementary School is a new mural that depicts regional agricultural themes and includes a game and an interactive feature where the school’s students can measure themselves.

His first local mural can be found on the Historic Y building in Downtown Tucson. Created in December 2018, the mural was finished in just under a week with the help of two undergraduate students, Brisa Tzintzun and Analaura Villegas.

Tzintzun and Villegas have been tapped to be Karlito’s assistants for this new mural as well.

Following his graduation from the University of Arizona, Karlito was accepted as a studio program resident for the 2019-2020 Whitney Independent Study Program. This highly competitive and internationally-renowned program provides emerging artists with a year-long New York residency and has been a launching pad for many contemporary art stars.

Karlito has received numerous awards and recognition for his artwork, including the 2018 Graduate Student Centennial Achievement Award, the School of Art’s Marcia Grand Centennial Sculpture Award, and the College of Fine Arts 2017 Creative Achievement Award.

His work has been exhibited by esteemed institutions around the world including the Newark Museum, El Museo Barrio in Harlem, the United Nations Headquarters in Geneva, Switzerland, the Street Art Museum in St. Petersburg, Russia, Twitter’s New York Headquarters, EARTH University (School of Agriculture of the Humid Tropical Region) in Costa Rica, and the Hudson Valley Center for Contemporary Art in New York. In 2018 he was featured on the BBC’s Documentary Series, The Art of Now.