Art History Professor Sarah J. Moore criss-crossed the U.S. this fall, including presenting a paper on landscape at Yale University in New Haven, Connecticut, on Sept. 30.

Her paper, “Neither Land nor Landscape: Time Landscape as In-Between Formation,” examines artist Alan Sonfist’s environmental land art sculpture for New York City that visualized how the city looked before urbanization. The paper is part of a larger book project for which Moore was granted a sabbatical leave in Spring 2023.

Moore’s presentation was part of Yale’s weekend symposium, “(Re)thinking Landscape: Ways of knowing / Ways of being,” an interdisciplinary event that brings together a distinguished group of artists, activists, and scholars working at the convergence of landscape, representation and the politics of land.

“If landscape studies have traditionally focused on questions of representation and cultural imaginaries, how does taking land seriously as a category prompt a rethinking of landscape?” the symposium organizers ask.

In early October, Moore attended the Southwest Art History Conference in Taos, New Mexico. On Oct. 7, She presented another section of her book project: “Classicizing the Wilderness: Seattle’s 1909 World’s Fair,” on the so-called Temple of Timber.

Finally, she presented a paper virtually Oct. 21 as part of the three-part “Belatedness and North American Art” series of conferences sponsored by The Courtauld, London.

Moore’s paper, “Belatedness and Materiality: Extracting Peale’s Mastodon from the Pit,” is another section of her book in progress. It considers Charles Wilson Peale’s “Exhumation of the Mastodon,” 1806-08, as “a case study for an ecomaterialist approach to the history of art in the United States and its intersection with the problematics of belatedness,” according to the conference website.

Earlier this summer, Moore criss-crossed the world. She presented another chapter of her book project, “Slow Trees in Manhattan,” at the Counter Image International Conference in Lisbon, Portugal, in July.

She was based in Kyoto, Japan, as the Terra Foundation for American Art visiting professor at Doshisha University. The foundation is considered the most prestigious in support of American art scholarship. Moore taught virtually in the fall and in-person this spring classes in American art in the global studies program.

Moore also served as a keynote speaker at the online Inaugural Biennial International Conference, Institute for the Study of International Expositions, a global network of researchers interested in world’s fairs and expositions. 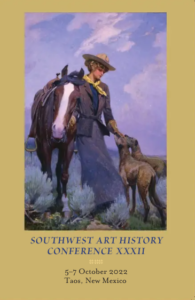