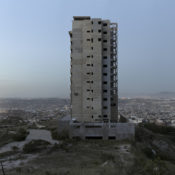 Beginning in 2007, Arizona-based artist David Taylor set to work photographing the monuments that delineate the land boundary between Mexico and the United States. Documenting each of the obelisks installed by the International Boundary Commission following the Mexican/American War across 690 miles, he created an exhaustive document. Over the seven-year duration of his work, with tensions over immigration growing, Taylor became deeply familiar with the region, including the physical terrain, shifting politics, and human dynamics. The artist’s work engages an historic survey conducted by Boundary Commission photographer D.R. Payne between 1891 and 1895 and represents the contemporary border over a period of dramatic change. His completed project, Monuments: 276 Views of the United States – Mexico Border will be presented in its entirety in an eight by fifty-four foot grid.

Here and Abroad will also feature new images that complement and depart from the artist’s serial documentation of the borderlands. Many of these pictures were made in the last few years and convey the complexity of Taylor’s experience. Primarily made in Tijuana, these new images are guided by personal exploration and interaction. The photographs, including epic landscape views, portraits, street scenes, still lifes and interiors are meant to reveal a space that is simultaneously foreign and familiar, much like the border itself.