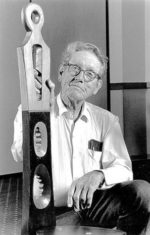 The late Lionel “Lee” Rombach was living the green life long before it became trendy. He biked more than 5,000 miles a year around Tucson and lived on a $4-a-day diet of oats, beans, rice and powdered milk.

Not only did Rombach’s conscientious lifestyle limit his carbon footprint, it also allowed him to help others as much as possible.

“Service is my creed and I’ve stayed with it quite well,” Rombach told the Arizona Daily Star in 1999.

The University of Arizona benefited greatly from the 93-year-old retired probation officer’s generosity. Rombach maintained a series of charitable gift annuities, charitable trusts and estate gifts that totaled nearly $1 million when he died in January 2008.

The many interests that he supported included the Eller College of Management, the School of Art and religious studies. During the last seven years, he also donated nearly $270,000 to scholarship endowments for students pursuing master’s degrees in public administration and other graduate programs.

Rombach’s approach to life is an inspiration to the many students who benefited from his kindness and demonstrates that one person’s efforts can make a difference.