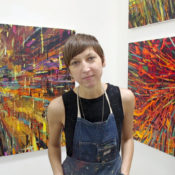 Note: This article was originally published in UANews. See the original article here.

The visiting assistant professor in the UA School of Art says engagement is essential in order for art to have impact.

Much of Audra Graziano’s canvas work lives in abstraction, begging the viewer be ever attentive to light and movement as the mind creates and re-creates meaning embedded within her highly complex, labyrinthine works.

But Graziano’s work is not limited to one surface or domain.

In drawing inspiration for her work, she has investigated data centers, telecommunications networks, relationships between colors and even the wiring of the human body.

The Massachusetts native, a visiting assistant professor in the University of Arizona School of Art who has shown her work across the nation, spent some time in Los Angeles serving as a scenic artist, producing backdrops, props and other commercial artwork. Her work has appeared on various networks and TV series.

At the UA in 2016-2017, Graziano will teach three courses at the School of Art, collectively focused on contemporary drawing, painting, mixed media and collage work.

As an educator, Graziano says it is most important to train students in the fundamentals of form and concept development — “the rules, so that they can break them and create their own way,” said Graziano, who also has lived and worked in New York.

“Fundamental to being a maker and a maker of visual things is that you need to be engaged in what you are making so that you can engage an audience,” she said, adding that it is her responsibility as an educator to help develop creativity in her students, particularly through active engagement.

“There is some sort of alchemy that happens when engagement can happen.”