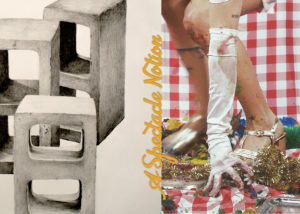 A Spectacle Notion is a show by Erin DiGiovanni and Marina Shaltout. “A spectacle notion” is the idea that something has qualities worth showcasing (odd, absurd, abnormal, or other). DiGiovanni and Shaltout use this term with ironic sentiment to speak about their past, traumas, and individual experiences. Some of these narratives are based on a single moment while others encompass overlapping recollections. The artists respond by way of fragmentation, narrative collage and image manipulation. Although their studio practices involve very different processes, these two artists share an interest in rescripting personal experiences.

Marina’s video installations are based on real experiences of her female family members while also referencing cinematic tropes of women throughout horror films. She showcases moments of destruction in order to validate all that is antithetic to female composure (erraticism, rage, mania, passion, and lunacy).

As a byproduct of loss, questions surrounding intimacy, relationships, and gender roles fuel Erin’s research. She studies, draws, and alters form and color within the familiar. This, in turn, creates new narratives for the domestic objects and spaces, which so often evoke dormant sentiments.

Marina Shaltout is a multimedia artist who combines sculpture/installation processes with video and performance. She received her BFA from the University of Illinois with an emphasis in metalsmithing. Marina has exhibited work in 8 states as well as Japan and Iceland and has completed artist residencies in Las Cruces, New Mexico and Stöðvarfjörður, Iceland. She is currently living in Tucson, Arizona and working towards her MFA at the University of Arizona.

Erin, who received her BA in Visual Arts from Northern Illinois University, is a second year MFA student in the 2D division. Her work primarily incorporates aspects from printmaking and drawing processes. While pursuing her degree at the University of Arizona, she instructs First Year Experience: Surface and has been a graduate assistant for multiple classes through the School of Theatre, Film and Television. Along with her academic and professional interests, Erin enjoys running and hiking the Arizona trails with her two dogs.