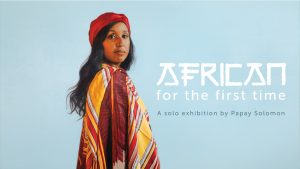 The Joseph Gross Gallery is pleased to present African for the first time, a solo exhibition by Papay Solomon. Solomon’s work tries to reconcile his African heritage within his adopted home country of America. His paintings employ the vocabulary of western art, however the people who pose for Solomon are fellow members of the African diaspora. Solomon’s meticulous approach to the work honors his sitter’s dignity and cultural identity as he works to fold into the paintings representations of their stories and history.

Papay Solomon is a Phoenix based artists and Liberian war refugee. Solomon was born in Guinea in 1993, his mother having fled the First Liberian Civil War while she was still pregnant with him and crossed the border to the neighboring country on foot. At age 5, growing political unrest forced Solomon and his family to once again relocate, this time from the Guinean city of Gueckedou to the refugee camps built several hundred miles away, where he would spend much of his childhood. At the age of 14 years old, Solomon migrated with his family to the United States. Solomon then completed his Bachelor of Fine Arts at Arizona State University as outstanding undergraduate in 2018. That same year, he was awarded the Friends of Contemporary Art Artists’ Grants Award from the Phoenix Art Museum and the Erni Cabat Award from the Tucson Museum of Art.