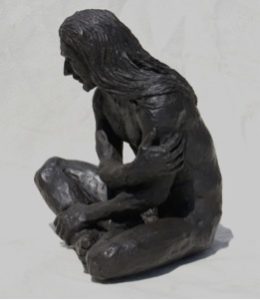 Black Figures, the primary group of work, is an exhibition of Ellen A. Cook’s three dimensional human forms in bronze and ceramics, based upon drawings and watercolors which were done from life. The body of work takes its name from the black finish that has been applied to each sculpture with patina or terra sigillata. Visions of Etruria, a smaller group of sculptures, originated from Cook’s study in classics and the Arizona in Italy program. She used Etruscan mythology and history as subject matter for the works, also finished with black patina. The artist avoided using the types of stylization which the Etruscans applied to their renderings of the human form, but sought to capture some of the exuberant, if occasionally morbid, spirit of the remnants the Etruscans left behind.

Ellen A. Cook is an honors student completing a Bachelor of Fine Arts with a 3D concentration at the University of Arizona.