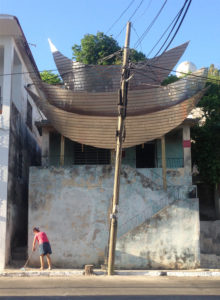 “Growing up in Lima, Peru I was struck by the sharp contrast between landscapes of extreme poorness and opulence that coexisted in that city. Probably as a consequence of that early exposure, my artwork strives to bridge the gap between opposite realities with the aim to create a new one.”

Cesar Cornejo creates work that reflects critically on socio-political issues and explores the relationship between art, architecture, and society in its broadest sense. In this lecture he will touch upon several socially engaged projects that he has carried out in community and gallery settings over the last fifteen years. Not limited to showing documentation, he will address aspects related to the behind-the-scenes circumstances that surrounded some of the projects, raising broader questions about the complex relationship between art and society. Cornejo will explain how his background in architecture, experience growing up in Lima, and living and working in different cultures has influenced his working process. He will also address the concept of “Reciprocidad Andina,” (Andean Reciprocity), which has parallels with his art practice.

Cornejo’s work has been included in exhibitions such as the California Pacific Triennial 2017; XII Havana Biennial; Busan Biennial 2008; V Biennial del Barro de America, Venezuela; and the Biennial S-Files Museo del Barrio, NY. He has received awards and residencies from the Creative Capital Foundation, Bellagio Center of the Rockefeller Foundation, The George A and Eliza Gardner Howard Foundation, the Sharpe Walentas Studio Program, and the Lower Manhattan Cultural Council, among others.