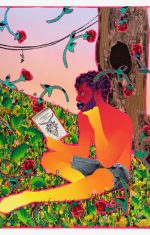 In this lecture I intend to unpack three bodies of work within my multidisciplinary practice: Mighty Mighty: The Barbershop Project in Washington D.C., paintings from my Black Homeowner series and sculptural objects dedicated to young Black lives lost to police brutality. Seeking to expand my practice in a variety of ways as an artist, I can simultaneously engage in critical discourse surrounding today’s identity politics both in and outside of the white box gallery setting and engage in critical discourse with non-art audiences surrounding intersectionality and toxic masculinity within Black communities. An observation as to how medium specificity or location of art venues can broaden or limit audiences.

Devan Shimoyama (b. Philadelphia, PA) received his BFA from The Pennsylvania State University in Drawing/Painting (2011) and his MFA from Yale University School of Art in Painting/Printmaking (2014). Shimoyama has exhibited throughout the United States, including at The Andy Warhol Museum in Pittsburgh, PA; De Buck Gallery, Lesley Heller Gallery, and The Studio Museum in Harlem in New York, NY; Kavi Gupta Gallery in Chicago, IL; Samuel Freeman Gallery and Deitch Gallery in Los Angeles, CA; and internationally at Frieze London and in Realities in Contemporary Video Art at the Fondation des Etats Unis, in Paris, France. Shimoyama has been featured in publications such as The Los Angeles Times, The New York Times, Out Magazine, The New York Review of Books, T Magazine, New American Paintings, Vice, Filthy Dreams. Devan is currently full-time faculty at Carnegie Mellon University, and lives and works in Pittsburgh, PA.