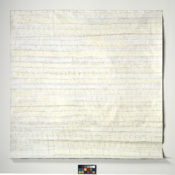 Huey Copeland is an art historian, critic, teacher, administrator, and occasional curator based in Chicago. Currently, he is Interim Director of the Black Arts Initiative, Arthur Andersen Teaching and Research Professor, and Associate Professor of Art History at Northwestern University, where he also enjoys affiliations with African American Studies, Art Theory & Practice, Critical Theory, Gender and Sexuality Studies, and Performance Studies. His research focuses on modern and contemporary art with an emphasis on articulations of blackness in the Western visual field. An editor of OCTOBER and a contributing editor of Artforum, Copeland has published extensively in peer-reviewed journals as well as in numerous international exhibition catalogues and essay collections. Most notable among his publications is Bound to Appear: Art, Slavery, and the Site of Blackness in Multicultural America, a book published in 2013 by the University of Chicago Press. At present, Copeland is at work on two complementary volumes: “In the Shadow of the Negress: A Brief History Modern Artistic Practice in the Transatlantic World,” which explores the constitutive role played by fictions of black womanhood in Western art from the late 18th century to the present, and “‘Touched by the Mother’: On Black Men, the Aesthetic Field, and Other Feminist Horizons, 1966–2016,” which brings together a selection of his critical essays. In 2019, his contributions to the field were recognized by the High Museum of Art with the David C. Driskell Prize in African American Art History.