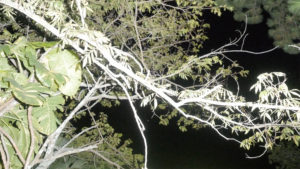 Murmullos, Spanish for murmurs or whispers, is Conor Elliott Fitzgerald’s ongoing exploration into legacies of violence in Central America. His current iteration of the project consists of audio and video projection investigating US involvement in El Salvador’s civil war during the 1970’s and 80’s. Fitzgerald is pairing audio tracks of him reading declassified government documents aloud with videos of the Salvadoran jungle at night. Recorded this past summer in areas of El Salvador that saw great suffering during the war, the videos are poorly lit and contain a dearth of visual information. Viewers’ only opportunity to fully make out the contents of the images is fleeting bursts of light, revealing dense foliage.

Born in New Mexico, 1980, Conor Elliott Fitzgerald currently resides in Tucson, where he is pursuing an MFA at the University of Arizona. His photography and video practice began while serving as a Peace Corps Volunteer in Central America. Making images started out as a way to document his experience as a health educator, but steadily evolved into a tool for processing the situations and issues he was confronted with. Fitzgerald’s experience in Central America continues to shape his research interests and inspire his image making.