CANCELED DUE TO COVID-19 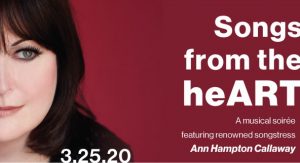 March 25, 2020 will be a very special evening. Those of you who are fans of Ann Hampton Callaway, who have heard her recordings, seen her performances in NYC, DC, Minneapolis, Florida, New Mexico, myriad other locations, or at the Fox Tucson Theatre last October, know that listening to Ann in a private home setting will be truly remarkable. Those of you who have yet to discover Ann’s creativity, will be enchanted by her “sheer vocal beauty” (NY Times). “Callaway establishes herself as one of the best equipped jazz vocalists swinging today.” (Chicago Tribune). Ann is donating the evening’s performance to benefit the UArizona School of Art in her newly adopted hometown of Tucson!

Ann will compose a song for the highest bidder in a live auction. Barbara Rogers is creating a work on paper to be auctioned that evening. Join them and support the School of Art.

Address provided upon registration.
The audience will be limited to 60.
Wine and light hors d’oeuvres will be served.

Ann Hampton Callaway is one America’s most gifted and prolific artists. A leading champion of the great American Songbook, she’s made her mark as a singer, pianist, composer, lyricist, arranger, actress, educator, TV host, and producer. Voted by Broadwayworld.com as “Performer of the Year” and two years in a row as “Best Jazz Vocalist,” Callaway is a born entertainer. Her unique singing style that blends jazz and traditional pop, making her a mainstay in concert halls, theaters and jazz clubs as well as in the recording studio, on television, and in film.

Callaway’s live performances showcase her warmth, spontaneous wit and passionate delivery of standards, jazz classics and originals. She is one of America’s most gifted improvisers, taking words and phrases from her audiences and creating songs on the spot.