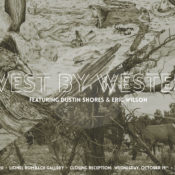 For the past two centuries Americans have had the impulse to explore the West.  What draws us Westward?  What does the West bestow on its inhabitants?  What is the American West now?  Dustin Shores and Eric Wilson explore these questions in the exhibition West by Wester.  Through different aesthetics with similar concerns, the artists present how the American West has called upon so many to explore.   The artists investigate what is the West, acknowledging the past while focusing on the present.

Dustin Shores was born in 1983 and grew up in the rolling foothills of North Carolina. He received his BFA in Fine Arts Photography from Winthrop University, located in Rock Hill, South Carolina in 2009. He currently resides in Tucson, Arizona and is pursuing an MFA in Photography.

Eric Wilson was born in the Chicago suburbs in 1991. While attending Northern Illinois University he fell in love with the art of lithography and completed his BFA with a printmaking concentration in 2013. Wilson is working towards his MFA at the University of Arizona, focusing on printmaking and installation based art.

We are over the moon 🌙 to welcome Emily Miu as a first year student this fall!

At first, Emily's path to college was blocked by barriers that were steering her away from what she wants to explore and she considered not attending at all.

That changed after attending the Visions program offered by Scottsdale Arts. Through this program, Emily had the opportunity to work with professional artists and visited us for a workshop.

Through our partnership with Visions, we were able to offer Emily scholarships so she can start her journey as a Wildcat this August! Her parents were misty eyed at the Visions '22 opening reception, saying that she would likely not have attended college at all, if not for Visions and the School of Art!

We are looking for models for our fall courses!
arizona.csod.com/ux/ats/careersite/4/home/requisition/9951?c=arizona ... See MoreSee Less

Congratulations on a job well done. 👏Very proud of you and your accomplishments.