The show explores the challenges, discussions, interchanges and negotiations that take place when existing between multiple cultures. It ran through Nov. 12 at the gallery, 4226 E. 2nd St., with an opening reception on Oct. 15 and an artist talk with Nguyen on Nov. 3.

Navab, who received an MFA in Studio Art in 2019, spent this summer in Iran researching and collecting ideas and images for her work in the exhibition. She works in various mediums, from 3D modeling to video, sound and photography.

Scott Duerstock, managing director of Yun Gee Park Gallery, said Navab’s work “conveys the sense of separation that she felt while in Iran of belonging and understanding the culture, yet being separated from full acceptance by repeatedly being identified as an ‘other.’”

“She accomplishes this through photographs taken while in Iran – where the subjects all face away from her – that are printed on glass with soldered brass frames that were salvaged from her family home’s coffee table,” said Durestock, who is a member of the School of Art Advisory Board. 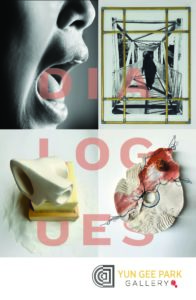 Navab, now based in Brooklyn, New York, is an art instructor/lecturer at the Stevens Institute of Technology in Hoboken, New Jersey.

“Domestic items from her childhood home are a pervasive theme in her work,” Durestock said. “This is the home in America where she was raised to understand Persian language and culture, but where she also learned American culture.

Navab’s series also features works of handmade paper created from Persian cucumbers, “symbolizing her separation from Iranian society by being perceived as Persian on the outside, yet white on the inside,” Durestock said.

Navab received her BA in Interdisciplinary Computing Arts and Media from the University of California, San Diego. In 2016, she presented her work at the State Center for the Arts in Tijuana (CEART Tijuana), Mexico. Navab was part of a traveling group show, “Someone to Ride the River With,” which has shown at various art galleries in the Southwest.

Nguyen, who received a BFA in Photography from the School of Art in 2010, is the head of photography at Pima Community College in Tucson.

In “Dialogues,” she’s created a multimedia installation that includes photography, video and sculpture.

“She explores language learning, where the act of endeavoring to learn correct pronunciation of the target language can result in the vocabulary of the language losing its meaning,” Durestock said, “eventually becoming unintelligible to both the language learner and the native speaker.”

Nguyen, who received her MFA in Photography/Video from Southern Methodist University, has exhibited and taught photography, painting, linoleum, performance art and concept-driven workshops nationally and internationally.

“As a Vietnamese-American artist, my primary artistic source material for the last decade has been my personal history and experiences as a female immigrant,” Nguyen said on her website. “Through my art making, I investigate my cultural and identity as well as my migration story through photography, video, installation and performance art.”

Her works are in permanent collections of Amarillo Museum of Art, Tucson Museum of Art, Center for Photography at Woodstock among others. She recently was awarded the Second Sight award from Medium Photo, and her work is on the front cover of Southwest Contemporary Magazine.

The other artists featured in the “Dialogues” exhibition were Saskia Jorda (Venezuela) and Eliane Paulino (Brazil).