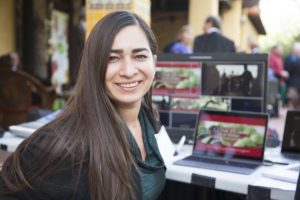 The story also aired on PBS NewsHour Weekend on June 8.

“Where Dreams Die” features local artist Alvaro Enciso’s efforts to honor the lives of more than 3,000 migrants who have died in the Sonoran Desert in Southern Arizona attempting to cross the U.S. border in remote, dangerous terrain due to changes in U.S. policy. Enciso has assisted the Tucson’s Colibrí Center for Human Rights connect family members.

“Ever since it aired, it has prompted all kinds of reactions from the community especially because of its humanitarian subject matter and our present political climate,” Islas explained. “The feedback has been positive, motivational and empowering. Visual storytelling not only raises awareness and prompts strong emotions but it can move people into action.”

Islas served as videographer on the feature; Westdahl was the producer/editor.

“It’s an honor to see that our hard work has been recognized with such a prestigious award,” said Islas. “It means that it’s made an impact and that some of the most phenomenal and respected journalists saw the value in it.

“It floored me. It feels surreal!” 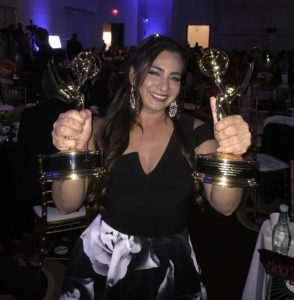 Islas graduated in 2015 from the School of Art with a Bachelor of Fine Arts in Photography, which has been recently renamed Photography, Video and Imaging. She worked as a Production Technician before accepting the position of Television Director at Arizona Public Media. Islas is now using her experiences as a visual artist to communicate compelling messages that evoke emotional responses. Since her days as an undergraduate student, she has been interested in creating work about her Mexican heritage. School of Art faculty member Carlton Bradford described Islas as dynamic and driven, and noted her undergraduate work addressed Hispanic identity issues for those living near the US-Mexico border. Having the opportunity to work for Arizona Public Media has enabled Islas to create work that is meaningful to her and to Southwestern border communities.

“The School of Art prepared me not only to understand the power of images, but also to understand our power as individuals, our role in the community as professional artists, and the responsibility that comes with conveying our identity and ethical values through our art. We hope that our story can inspire others to continue to raise awareness on similar topics and enhance interconnectedness in our society.”

Dustin Lee Shores and Eric Wilson, master’s degree students n the UA School of Art, have set out to examine perceptions of the historic and contemporary aesthetic associated with the West.

Happenstance seated Dustin Lee Shores and Eric Wilson side by side in a contemporary issues in fine arts course taught by art professor Sama Alshaibi, who then paired the two — merely because they were seated in close proximity — for a course assignment.

It was the first meeting of Shores and Wilson, both new to Tucson and graduate studies in the University of Arizona School of Art. Weeks prior, each had driven hundreds of miles to relocate in Tucson, Shores from North Carolina and Wilson from Illinois.

In their early conversations, each realized they shared eerily similar perceptions and, in some ways, misguided beliefs about the West that, for them, formed a type of mythology. Informed by Western films, media depictions and even the iconic photographic legacy of Ansel Adams, the two imagined the West would be in stark contrast to their hometowns.

“It took me almost four days to drive here. What I started to notice was that the scenery was the same. Lots of McDonald’s, Wal-Marts and 7-Elevens,” said Shores, a photography student in the Master of Fine Arts program. “I had imagined a revolution. I thought it would be completely different, but that was all an illusion, and I had bought into this illusion.”

This led Shores and Wilson to launch a joint investigation into the aesthetics and documented history of the West, questioning westward expansion and exploration and imaginations associated with the West.

Shores studies contemporary manifestations of the West through photography. Wilson collects toys, trinkets and tokens that speak to American history, culture, heritage and geography, incorporating them into his artwork. In doing so, they attempt to reimagine truths associated with Americana and how iconic aesthetics are born and become commercialized.

The two co-presented “West by Wester” at the UA’s Lionel Rombach Gallery during the fall semester. This month, they are bound for Monument Valley in the Colorado Plateau. There, they will investigate visual documentation of the region, “the natural icon of the West,” said Wilson, a master’s student studying printmaking and installation-based art.

An example both presented are the typical, humanless photos of the Grand Canyon and Hoover Dam. Though aesthetic, both see such imagery as strangely abstracted, projecting in some ways an incorrect image of the place. Such images, they explained, also sometimes negates the possibility of understanding environmental or economic concerns or ways in which certain people are stereotyped.

“You think of it as an idealized image. People often aren’t even in the photos, but for me, stepping back and photographing people in these iconic locations delivers a different message. By looking at these photographs, I am trying to critically analyze something that has been idealized.”

Together, their work encourages viewers to construct new and different meaning associated with the West.

“This work is about more than just the Southwest, it is about the construction of America, and that is connected to constructions about the American Dream,” Shores said.

While the two have developed a critical perception of how the West is sometimes depicted, each acknowledges that they also have developed a newfound appreciation for the nation’s regionality and social, cultural, political and economic nuances found in different places.

“I have learned a lot, and this place has opened my eyes to just how diverse the United States is,” Shores said.

This summer, he intends to return home to begin his thesis work: a photographic examination of the Southeast. Wilson plans to explore mythology and iconography associated with Americana through the creation of dioramas “depicting the world’s largest things in miniature to play off of the tendency toward extravagance.”

“This experience has opened me up to understand the social and economic instability in the Southeast,” Shores said. “It is something I did not have the skills to explore, but do now.”

Wilson also said his understanding and respect for the West has deepened in ways previously unimaginable.

“I find it to be a very magical place,” Wilson said. “There is somehow a collision between what is magical and what is real, and that starts to create new images in my mind.” 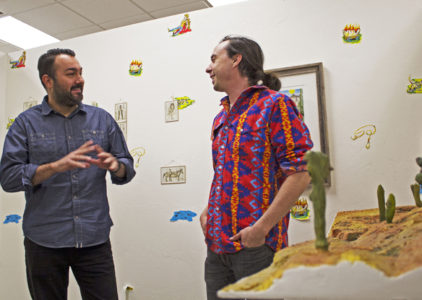 “On numerous occasions, I have thought to myself about the wonderful, positive impact David will have on our world as he goes on with his life.” – Andrew Polk, Professor of Art

What a fitting observation to introduce undergraduate School of Art student, David Contreras. David, a senior at the University of Arizona, who in the words of Associate Professor of Art, Cerese Vaden, is not only “in the budding stages of a prolific and unique art career” but also an individual working to create an accessible and connected art community within Southern Arizona in hopes of bettering our youth.

While earning a Bachelor of Fine Arts degree in Art Education and 2D Studio Art, David, a Tucson native, threw himself headfirst into his education and artistic practice. While David’s foremost focus is in printmaking, he’s fearlessly explored myriad artistic mediums while a student at the University of Arizona’s School of Art. David credits his multi-disciplinary coursework as well as the School of Art’s professors as key components in his growth as an artist. As such, it is only fitting that David’s recommendation to incoming Fine Arts students is to “learn as much as you can, experience as much as you can, and to expose yourself to all the possibilities that the School of Art has to offer”. His close second recommendation is to at least once work from sunset to sunrise in the School of Art studios.

David’s fearless fervor for exploration led him to attend two competitive study abroad programs in Italy and Mexico as well as two highly respected international printmaking workshop in South Dakota and Nebraska. Through these programs, David realized the significance of creating one’s own artistic network. With this knowledge, David has crusaded to create a connected and approachable local art community right here in our very own city.

As Vice President of UA’s Wildcat Print Association, a club dedicated to promoting a prosperous printmaking community on UA’s campus, David has recruited students and seasoned artists alike to advance the clubs mission to unite experienced printmaking artists with UA students. In addition to the building a flourishing printmaking community on campus, David volunteers and exhibits his work at Raices Taller Gallery and Workshop in Tucson. During his shifts, David often stands outside the gallery entrance inviting local youth and pedestrians into the space. He says, “Art can be intimidating. But I want people to realize that art is there for everyone to experience”. David plans to continue inspiring community engagement by earning an MFA in printmaking, with the eventual goal of opening his own non-profit print shop & gallery to help troubled youth through art. 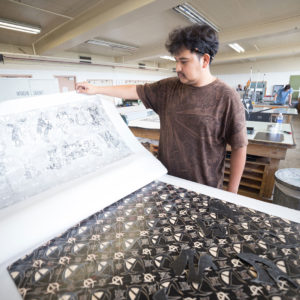 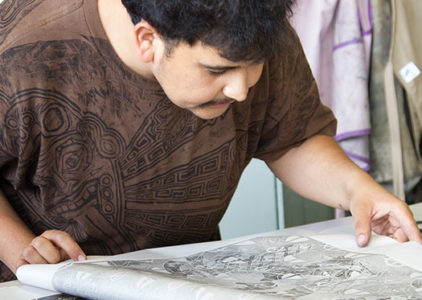